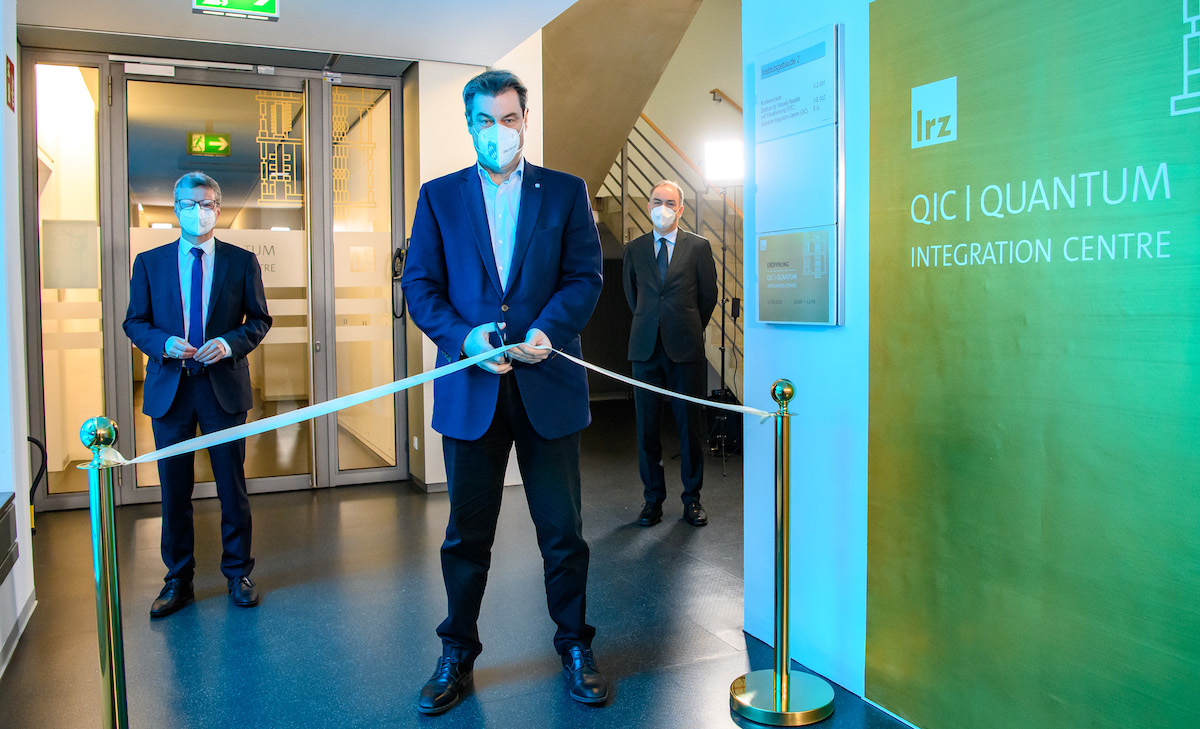 The Leibniz Supercomputing Centre (LRZ) of the Bavarian Academy of Sciences and Humanities has opened its Quantum Integration Centre, or QIC for short. Bavaria's leading scientific computing centre is taking quantum computing out of the physics labs and bringing it to scientific applications. Present at the QIC launch: Bavarian Minister President Markus Söder and Bavarian Minister for Science and the Arts Bernd Sibler.

With the Quantum Integration Centre (QIC), the LRZ is pursuing three ambitious goals and making an important contribution to supporting the Munich Quantum Valley initiative of the Free State of Bavaria in Germany:

With the Quantum Integration Centre (QIC), the LRZ is pursuing three ambitious goals and making an important contribution to supporting the Munich Quantum Valley initiative of the Free State of Bavaria in Germany:

(1) Establish and expand quantum computing resources and services for research scientists in a reliable, secure, and flexible manner.

The education and training of highly sought quantum computing experts prevail in all three objectives.

Out of the labs and into the (scientific) computing centre

Quantum computing is still in the experimental stage. However, with the first components and often with supercomputers' help, quantum capabilities can already be built up for use by research and industry. That is why the LRZ is cooperating with Atos and has put the Atos Quantum Learning Machine (Atos QLM) - the world's most powerful commercially available quantum simulator - into operation. The system was specifically designed to develop quantum computing algorithms and perform initial simulations without specialized quantum hardware.

"We are honored to be one of the first hardware partners of the LRZ Quantum Integration Centre," said Elie Girard, CEO of Atos. "Quantum science and technologies are seen as key to the 21st century. Atos has launched a broad initiative to help companies experiment and learn with quantum computing even before they have access to quantum hardware. We are proud that the Atos Quantum Learning Machine will be used within the Munich Quantum Valley."

While the first quantum algorithms and applications are already being developed, the LRZ is working on quantum processors with the Finnish-German startup IQM and other partners. "Digital-Analog Quantum Computing" (DAQC) is the name of the project funded by the German Federal Ministry of Education and Research (BMBF), which combines the technology of analog, controllable systems with that of digital universal quantum computers. This will result in robust quantum processors with first 5, 20, and then 54 qubits, and the methods and electronics to control them. These innovative control units will be integrated into the LRZ's high-performance computing testbeds. For this purpose, the LRZ is procuring a cryostat, a cooling device for the low temperatures needed for superconducting quantum computing.

"At IQM, our main focus is on building co-design quantum computers and integrating quantum accelerators into supercomputing centers. As a system integrator, we are already capable of building quantum computers that can achieve these goals. We look forward to working with the LRZ and our ecosystem partners to launch the ambitious DAQC project and support other international quantum initiatives," said Jan Goetz, CEO of IQM Quantum Computers.

Based on the Quantum Learning Machine (QLM) and later with on-site quantum systems, the QIC will establish and expand its innovative resource and service quantum portfolio for science and research. To best fit offerings with needs, the LRZ founded the Bavarian Quantum Computing eXchange (BQCX) in 2019 to serve as a strong channel with and for the local and international quantum communities. Through the BQCX, academic and industry researchers are connected with emerging technology, with one another for research collaborations, and with hardware and software providers for education and training opportunities. In addition to ideas for initial seminars and workshops, early BQCX meetings facilitated the LRZ's quantum strategy to establish the QIC.

The recorindg of hte Live-Stream is available here.