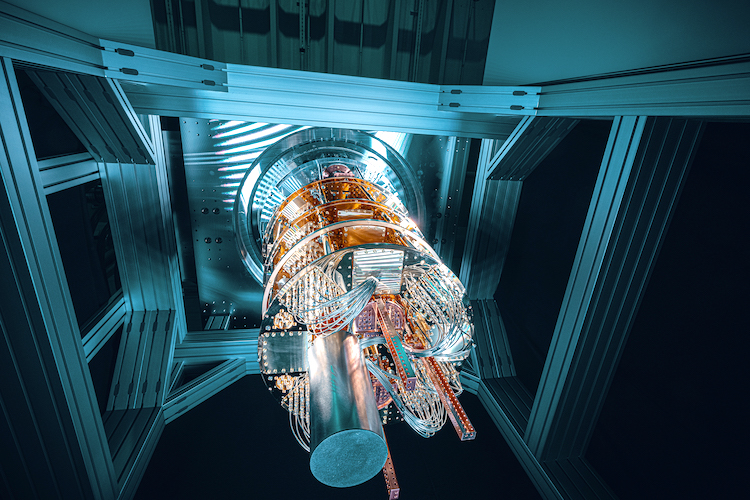 Quantum computers have to be cooled. Thats the task of the beautiful cryostats. Photo: IQM

The course for the future has been set: "In quantum computing, we are involved in eleven projects to research the new processors, to develop software stacks and programming environments, and to integrate quantum computing into supercomputing," says Prof. Dr. Dieter Kranzlmüller, Director of the Leibniz Supercomputing Centre (LRZ). "The practical handling of this technology will be exciting and offers many challenges for research and development." In the future, growing volumes of data will continue to be analyzed in real time, if possible, and so high-performance computing (HPC) will need new concepts to increase computing power and accelerate computing for greater energy efficiency. "Quantum computing could become a next development step for high-performance computing," envisions Dr. Martin Schulz, professor of computer science at the Technical University of Munich (TUM) and part of the Board of Directors at the LRZ. "The integration of quantum into supercomputers, as well as the interplay of HPC, artificial intelligence and quantum, could provide the necessary performance boost."

Quantum as a Service for research

Quantum computing is currently electrifying politics and research. As scientists and entrepreneurs come up with better methods for data analysis, politicians in Europe and Germany are hoping to catch up again in information technology and reach “digital sovereignity”. Billions are currently flowing into research aimed at bringing this technology to use and market maturity in the next few years. As institutes of the Bavarian Academy of Sciences and Humanities (BADW), the LRZ and the Walther-Meißner-Institut have co-founded Munich Quantum Valley (MQV) with Munich's universities, research institutions and technology providers. In addition, the computing centre has started working in 11 research projects throughout the last year and is now bundling its tasks in the Quantum Integration Centre (QIC). "As with all technologies, the LRZ is also concerned with providing reliable IT services for science and research in quantum computing. Supercomputers are severely challenged when processing the largest volumes of data, so we will integrate quantum processors and quantum components into our high-performance systems, explore how they work and develop more services," says Kranzlmüller.

Even though they have already left the experimental stage, quantum computers still operate largely under laboratory conditions: To stabilize and control quantum bits, the smallest computational units, it is necessary to avoid disturbances such as temperature fluctuations, vibrations or light incidence. Computing centres, and supercomputing centres in particular, therefore bring the technology to users as quantum-as-a-service. Only they can create the necessary technical facilities and the conditions under which qubits assume the states 1 and 0 as well as intermediate states, entangle with each other and produce computing power. Each additional qubit can double this.

"The first quantum computers will need a computing infrastructure with proven control to monitor results or spin up software and data," Schulz cites reasons why quantum computers are now being connected with supercomputers. "We should embed quantum into supercomputers in such a way that the machine runs through without a human having to sit next to it and control it." In order to analyze complex folding of proteins by quantum computers, calculate transport pathways and for the widely deployment, tools for control are still missing, an operating system, programming environments, firmware and software stacks. For the development first the supercomputers will provide the control mechanisms for the new processors, so that necessary tools and software can be developed in collaborations between researchers and companies.

Through supercomputers into the use

Operating systems and tools are consequently the focus of the LRZ's projects. In Munich Quantum Valley, they are planning a Munich Software Stack for quantum computers. But first, efforts are focused on embedding a quantum processor into the LRZ supercomputers: For the project "Quantum Computer Extension through Exascale HPC", or Q-Exa for short, the LRZ has purchased the first quantum system or demonstrator in Germany from the German-Finnish company IQM in November 2021 with funding from the German Federal Ministry of Education and Research. The processor will have 20 qubits, be based on superconducting metals and cooled to minus 273 degrees by a cryostat. "Q-Exa is a key project for our activities in the QIC and within Munich Quantum Valley," Kranzlmüller reports. "By working together in this highly competitive consortium, we can set European standards that are also globally competitive."

Even though the processor is still being developed, the quantum specialists at LRZ are already planning how the computer will be connected to HPC resources. The Quantum Learning Machine (QLM) – by French technology company Atos – offers useful help. Not only can researchers use it to develop quantum algorithms and process simulation data, this quantum simulator can also be used to develop the first codes and interfaces via which binary chips work together with universal quantum computers - the basis for all further developments: "A lot of the preliminary work required to integrate the quantum computer into the supercomputer can be done on the QLM," says Schulz. "The QLM is a vehicle to give early access to researchers and computer scientists before the real hardware is available." In addition to superconducting metals, other materials being experimented with to make qubits include ion traps, photons and even diamonds. Which technology will prevail is not certain. At Q-Exa, therefore, prerequisites are being worked out to embed other processors into HPC. "It's entirely possible," says Schulz, the computer scientist, "that special areas of application for different systems will emerge in the process - it remains extremely exciting." Once quantum computers are controlled by supercomputers, a major step toward practicality would have been taken, and additional components or software could be constructed and configured. Work on this is already underway at the LRZ and its research partners.

But it's not just quantum computing that should come into use; the effort should, conversely, push supercomputing: "By combining the most powerful computers with the potential of quantum computing," Kranzlmüller says, "we exspect the next big leap in supercomputing." At LRZ, they hope that quantum computers will act like accelerators, interacting with artificial intelligence methods to enable more complicated calculations in the medium term - and, above all, provide services for research: "Scientists need programming models," Kranzlmüller adds. "They need software stacks, access mechanisms via web or cloud portals. And above all, they need support to optimize their scientific and industrial problems on super and quantum computers." (vs)

The actual quantum projects, on which the LRZ takes part.