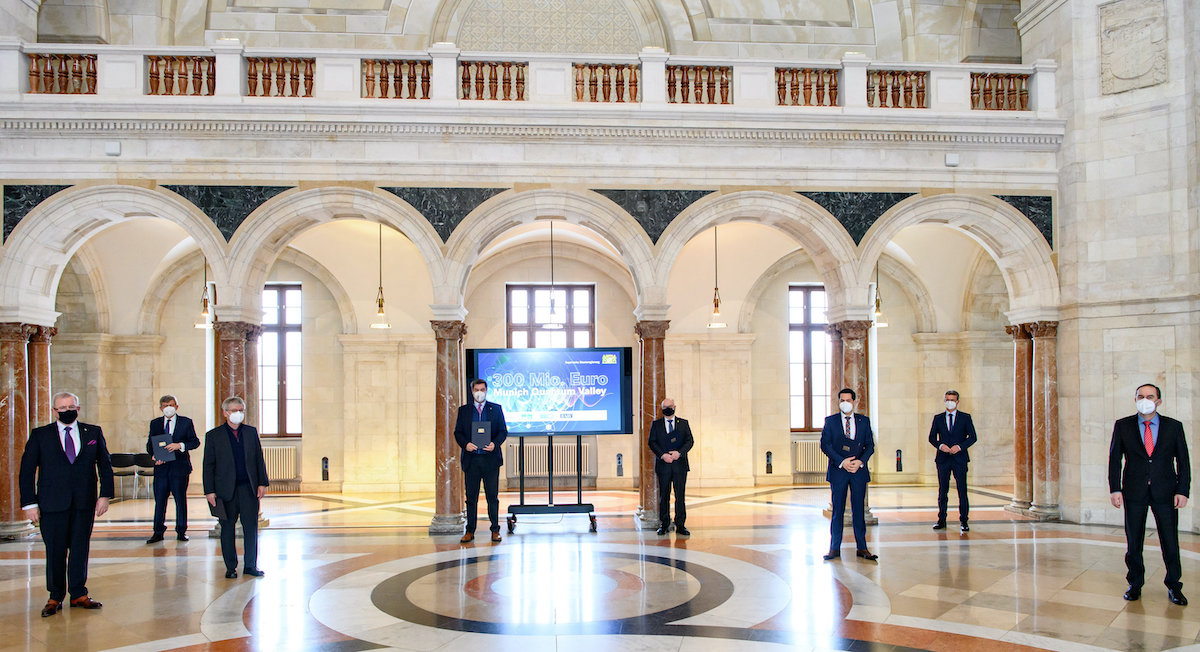 The Free State of Bavaria is driving forward the development of quantum technology and is relying on the Leibniz Supercomputing Centre (LRZ) for this purpose: The Bavarian Academy of Sciences and Humanities (BAdW), the Fraunhofer Gesellschaft, the Max Planck Gesellschaft zur Förderung der Wissenschaft and both Munich universities pooled their expertise in a Memorandum of Understanding on January 11th, 2021, and are jointly establishing the Munich Quantum Valley. Here, science, research, start-ups and industry will find a stimulating environment, opportunities for cooperation and exchange in order to develop quantum technologies and quantum computing and bring them to market.

Quantum Simulator for the SuperMUC-NG

As an institute of BAdW, the LRZ supports this emerging technology cluster: "In the immediate vicinity of the Walter-Meißner-Institut, the Technical University of Munich (TUM) and the Ludwig-Maximilians-Universität (LMU), we will actively support researchers with technology and expertise", says Professor Dieter Kranzlmüller, Director of the LRZ. "We are very proud to be part of this unique technology offensive of Bavaria and to be able to participate in the development of an important future technology". To this end, the LRZ already provides a quantum computing simulator with 42 qubits on its high-performance computer SuperMUC-NG. With the Bavarian Quantum Computing eXchange (BQCX) network, a networking platform for the Bavarian and international quantum community already exists at the LRZ. "We are working hard to give our users access to new quantum computing hardware to enable the development of an accompanying ecosystem offering software and algorithms", says Kranzlmüller. "The first training courses on quantum computing are also already in the pipeline."

At the Walter-Meißner-Institut in the neighbourhood of the LRZ the basics for quantum computers were researched and first technologies for the construction of processors were developed and investigated. The WMI, also an institute of the BAdW, has been shaping quantum technology for a long time and has co-initiated the Munich Quantum Valley. Quantum computers and simulators should one day solve problems that even the most powerful supercomputers cannot handle. They thus open up new perspectives for research and technology, but also for machine learning and artificial intelligence. As a Bavarian initiative, the Munich Quantum Valley is to be a pillar in a national and European quantum strategy and is to compete with international technology centers in Silicon Valley, Boston, Shanghai and Tokyo. To this end, the State of Bavaria will be investing 120 million euros over the next two years. In addition, the Munich Quantum Valley is to receive funding from the Federal Government, which is providing some two billion euros for quantum technologies.

The Munich Quantum Valley will offer founders, companies and science a unique environment for innovation, research and development. The current offensive follows a three-point plan: In addition to the establishment of a Centre for Quantum Computing and Quantum Technologies (ZQQ), a technology park or cluster is to be created, as well as programs for the qualification of scientists, the recruitment of top researchers, and the protection of copyrights and patent rights.

Links about the high tech agenda and quantum strategy of Bavaria (in German):